Spank Me needs a Hanky

Labels: Australia, Kady Stupid, poop
I need to preface this blog entry with a disclaimer:  I am freaked out by things that are dirty.  Maybe you already know this about me.  I like to keep my place really clean.  Not necessarily picked up, but clean.  If I see a dust bunny, I get out the vacuum and do the whole floor.  You get the picture.  (And don't go calling me a hypocrite, yes, I know my bedroom looks like the Wreck of the Hespress and my computer area is complete filth.  That's different.  Why?  I think because I don't put any part of my body on my computer desk.  I don't really need to parenthetically explain my OCD, do I?)

ANYWAY. So Teri and I arrived to the marina and walk all the way out to where the Spank Me is docked.  As we were getting on the boat, our shoes were confiscated.  They'll wreck the boat they say.  And so for the next four days, I walked in and out of a filthy bathroom, and into and out of my bed.  Barefooted.  Both are pictured below. 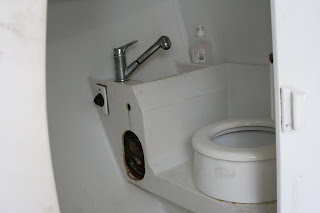 Now, what is so special about this bathroom, as you can see, is that the toilet is acutally on the counter.  I don't know what purpose this serves.  Maybe my brilliant niece Hanna, who knows that Stinger Suits can't keep out a sting ray can enlighten me.  So in this photo you can't really see that there is another foot of space below that little counter where the toilet is located.  It's kind of situated like a urinal.  By the end of the first night there was pee all down the front of the toilet and all over the floor.  I'm not sure how, but the entire room was wet with like a sweat on the walls and even the inside of the garbage was wet and everything in it was soaking wet.  When the captain was explaining the rules of the boat, he mentioned that the toilet had tiny little pipes and so you really don't want to put a lot of paper in there, especially after a nice number two.  Do your business, he said and then flush and then wipe and then flush again.  It's true.  The toilet is electric or something.  Cap'n said that to fix a clog is disgusting and he really hates to have to do it and so could everybody just please use less paper than they do at home?**

He also asked the girls to please brush their hair on deck because hair gets everywhere below deck and it's gross around mealtime to find hair in your food.  That turned out to be very true.  So back to the chewing toilet.  It makes a really weird sound as it's grinding up the poop or whatever, and the longer the poop, or the more the paper, the longer it will chew and so everybody knows if you went number one or number two.  I vowed that I was NOT going to use that bathroom for the next four days.  Somehow.

Teri and I accidentally chose bunks near the toilets.  This proved to be annoying not only because of those late night rude-ys who had to noisily use the bathroom at 1am, but also because there was absolutely NO ventilation below deck and so all we could smell all night was 18 people's poop, ground together into a poop hamburger and stored nicely in a tank not eight feet from our faces.  And guess where all that stew goes?  Yep, into the ocean.  Not treated in any way.  YUCK!!

When it was absolutely necessary for me to use the toilet, I tried to stand on the ground and squat.  But since the toilet was above squatting height, that didn't work and I tried Amy Poehler from Baby Momma's method of standing on the sides of it and then squatting way down, and that didn't work and the only other solution was to sit on it like I would on my own clean toilet seat at home.  ICK!

On the morning of day three, nature called and there was no stopping it and I had to use the toilet and flush it twice if you know what I'm sayin'.  I waited until no one was below deck and non-chalantly went into the bathroom.  Very quickly I was finished so there was a chance that nobody would know what I had been up to if they were listening.  Well then that insanely loud grinding toilet exposed me to all, taking 5 minutes to grind up my last three nights' dinner.  Don't tell a soul this and I'll kill you if you do, but it wasn't going down at first, and I didn't know how the stupid thing worked and it was just grinding and grinding and nothing was happening and so I had to use some toilet paper and kind of push it into the grinder.  GROSS!!  And then I had to wipe and flush again!  I want to throw myself in the garbage and get a new me as I type this.  And who was standing outside when I was finished but Cap'n Matt and cute diving instructor Johnny from Ireland, neither of them yet 25 years old?  (Cue the cougar jokes).  I sauntered out of there like I owned the place and quietly died inside.

Below you'll find a photo of our bunks.  We slept right out in the open, Teri and I and 12 other people, plus 4 crew members.  It was SO hot.  We did try to sleep on deck, but it rained at night and it was really cold up there.  One night I got up at like 1am, and stuck my head into the fresh air for a half an hour.  I looked to my right and there was the Big Dipper, upside down, laying right on the horizon.  That was so cool!  I probably haven't mentioned that the constellations here are completely different than at home.  And sleeping on the ocean you could see everything so clearly, black sky, white stars.  Gorgeous.  This story is about snoring though.  When I woke up at 1am, hot and sweaty and dying, I couldn't fall back asleep and the reason was because about 7 people were SNORING.  LOUDLY.  One huge regret, other than not getting a photo of the dirty floor in front of the toilet, is that I didn't get out my camera and take a video of the noise of the snoring.  Too bad for you, but check out the bunks.  There was no private place to change either.  I had to get in and out of my suit somehow in front of everybody else.

Imagine how dirty my feet were.  In fact, I had a special designated 'feet area' in my bed, that only my feet were allowed to go in.  And so when Teri went below deck to grab my sheet and pillow because she's super nice and sweet, I got mad at her anyway because she had no idea which was the top of the sheet and which was the part I wrapped around my feet all night long.  And so for all I know from that point on my face had poop on it.  From the sheet.  From my feet.

This photo shows four bunks actually.  There are more to the left of the hallway, and further down.  There is another hallway on the other side of the kitchen. 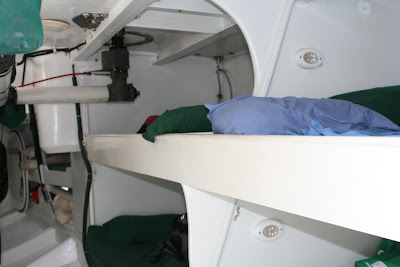 We had to pretend the dirtiness wasn't happening, and had a blast anyways: 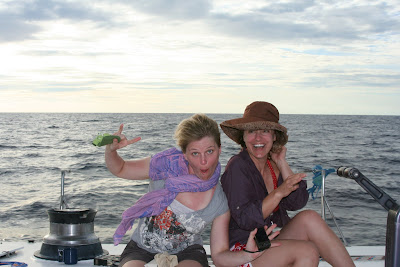 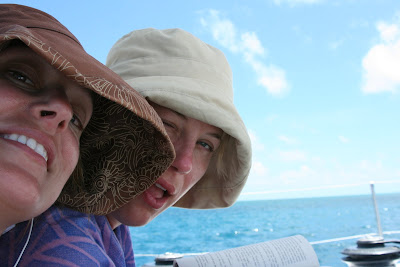 **(Summer Grimes and I were talking about how your writing style really is influenced by who you're reading at the time. Right now I'm reading Flannery Oconnor and she doesn't really bother with quotation marks in diaglogue.)
Posted by A Lady Reveals Nothing at 7:19 AM

Looks like you could sit on the pot and brush your teeth over the sink at the same time. That would be a handy time-saver. You couldn't even wear flip flops????? Ew ew ew...

I was eating my lunch at mom's and sat down at her to computer to see if my sweet cousin Kady had added any new stories to her blog. How sorry I am. Not so hungry anymore. Love, Jacqui

Kady, I would have to guess that the toilet is on a counter because it is in a boat and there is not a lot of extra space. They don't have thick walls that you can put pipes through. Also, perhaps, when a person has to fix the toilet it will be easier to get at because the plumbing is underneath the toilet and not running through a wall. Was there a panel to unscrew to get to the workings?

Love the poopery! Hilarious and disgusting... even for me. Following along from the States: Mark S.

I should know better by now NOT to read your blog while I am at work! I ended up uncontrollably laughing out loud, thus annoucing that yes I am not really "working"

I am now having vague memories that I had to do this also when I was on our sailboat... I must have blocked it out all these years

don't worry about the poop, we'll eat it. And die probably.

Thanks for all you tender feces and infections.