I just went scuba diving. Literally and seriously. This is one of the biggest fears in my life. Combine claustrophobia, fear of sharks, fear of monsters, fear of the dark, fear of drowning, fear of being alone in water, fear of being seen in a wetsuit...well that's Scuba Diving folks! But, part of my mission statement this year -- my "year off" --was to conquer fears. I wouldn't say I conquered anything, but I stared death in the face and went snorkeling and diving at the very famous Great Barrier Reef! (From here on out, referred to as the GBF) Now, to be fair, I did chicken out on my second dive, and I got too sunburned to really snorkel the GBF, but I'll get to that later.
Teri and I said goodbye to the fabulous Fishers from Sydney after purchasing loads of chocolate and flew to Hamilton Island in about three hours. We both marveled at how the flight seemed only 15 minutes and then realized we both slept through it. Landing at Hamilton Island was just beautiful. Imagine seeing ocean, sky, beach, and island right out your plane window. Now imagine that the runway is about 100 meters long and the pilot has to land you RIGHT NOW! We had planned to take a helicopter from Hamilton Island to Airlie Beach, however we mistook the online price of $55 per person to be literally $55 per person. Upon landing we found out that it actually costs $500 to charter a helicopter for a 15 minute ride, and so we opted to take the ferry for $45pp. We arrived to a wonderfully spacious hotel room complete with shower, air conditioning and view of the mountain. From there we checked into the dive shop for our sailboat/diving excursion to depart the next day. The two teenagers working the counter could not BELIEVE how OLD we were. This was the first of about 16 times we were to be called "cougars" over the course of the weekend. Two women who just happen to be in their 30's in the presence of 20-year-old babies does not a cougar make. For the record.

Check out this sign in a shop window in Airlie Beach: 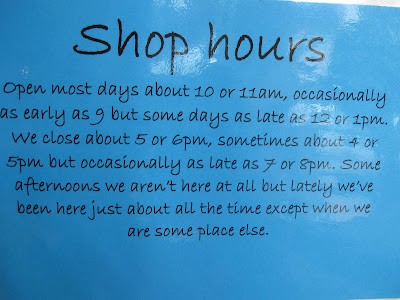 I digress. We got to the sailboat on schedule, I picked up my Stinger Suit (which later would make sense, since you have to wear it anytime you get in the water to prevent being STUNG by a sting ray.) and we got aboard the Spank Me. The Spank Me is a sailboat, previously used to win all sorts of sailing races and now strictly for the purpose of taking groups out to the reef for diving and snorkeling. We got acquainted by playing a couple of games. The first, we were tied at the wrists, and entwined with a stranger, and told to "get free." That was pretty fun. And I couldn't tell you how the trick worked, but my little twosome didn't figure it out. The German PhD Engineer and his girlfriend did.
We had 4 Brazilians, the German and his Chinese girlfriend, another German girl, a Canadian girl and a Norwegian girl, each flying solo, Teri and me, and 3 Canadian boys. 14 mishmashed strangers.  At some point during the night, the Norwegian girl noticed something greasy on her leg.  While Johnny the diving instructor went to get something to clean it with (toilet paper), everybody started noticing it everywhere, and when he got back, he said it was Squid Ink!  then later we found the squid.  I assumed this meant a 40 foot beast would be next to the boat, trying to tip it over, but instead it was this itty bitty tiny thing on the deck, dead.  It jumped OVER the boat, but didn't quite make it.  Funny, huh?
The next game was "Eat My Cardboard", where a cornflakes box was placed in the center and we were told to pick it up with our teeth, without our knees or hands touching the ground. Once you got it, you ripped a piece of cardboard off, making it harder and harder as you went. If you didn't get it, or your hands or knees touched the ground, somebody was elected to SPANK you with a snorkeling fin. Teri and I actually made it to the finals, along with one of the Canadian boys. My strategy was to let them fight it out, touch the ground and then calmly pick it up once they eliminated eachother. But Teri knocked out the Canadian and picked it up quite easily, won the game, and spanked me so hard I was back to 1984.
The next morning we woke up with the sun at around 6:30am, had breakfast and parked the sailboat somewhere out in the ocean and took the Tender (dinghy) to Whitsunday island. We hiked for a while through the bush and ended up on the other side, where a white sand beach spread itself as far as the eye could see. The beach sand was actually Silica, and NASA had taken 10 tons of it in order to make the most pure glass possible for it's satellites. We were told to rub it into our skin for an exfoliant, and to polish gold or silver jewelry with it, but NOT to take it off the beach, for fear of a $10,000 fine.
This story is getting long. Sorry. It was a four day weekend.

We got to go swimming there, and saw huge Sting rays. I didn't wear my Stinger Suit and so I got the heck out of there. They were so curious though, and it was kind of fun to see something like that so close up. You're supposed to shuffle your feet around them, because they can recognize the movement, and then they're less likely to sting you. After that we hiked back and headed in the sailboat out to a little bay, where we got to snorkel. I went, but only because everybody was in the water, and Teri promised to stay close. After an hour out there, I felt confident enough to try my hand at Scuba, with the promise that if ever I felt uncomfortable, I could stop. So we went to the beach, I was fitted with a regulator, a vest, a tank...told what to do if I lost my regulator, the signs to make if I wanted to go up, if I felt like something was wrong. And then we set out! I couldn't believe I was SCUBA DIVING! In Australia, land of the Great White Shark! I had a death grip on the poor instructor's hand, and didn't let go, but I got through it. I cut my foot on the coral reef, and panicked, and my regulator came out of my mouth, but I remembered what to do and everything turned out A-OK.
When I took off my stinger suit I realized that my shins were burned bad. I had put sunblock on them, but didn't reapply quickly enough, and then fell asleep on deck. I was happy that I had at least soaked my burn in the water for so long.

That night we sailed to the GBF, which took about 2 1/2 hours. We slept there and in the AM I was told that I would be in the first group of divers. I started to get that shaky fear shake while I tugged on my Stinger Suit and felt pretty freaked out about it. When I first dove, I was near a beach, the water was relatively shallow and here we were, in the middle of the OCEAN, on the Great. Barrier. Reef. I got into the Tender, still shaking and tried to calm myself down. Now I realized I was going to have to drop backwards into the water. With a tank on. Like you see in the movies. This got me more panicky. And then, my vest was too big. I couldn't get it tight and then suddenly it was time to drop into the water. Which I did. I can't believe I did it but I did it. Then, while in the rough, wavy water, I had to get my mask cleaned out. Spit in there, rub it around, swallow ten gallons of salt water. I wasn't quite on top of the water.  Finally my instructor mercifully inflated my vest a little bit and that made it better. We were ready to drop. And we did. I breathed through my regulator, and as we dropped I realized there was no reef in sight. Just miles and miles of ocean, and no bottom. I started breathing more rapidly and that started a panic which was added to my already panicky state and suddenly I'm hyperventilating through my regulator. I gave the instructor the sign for "something's wrong" and then the "let's go to the surface" sign and so we did and I just told him I wasn't feeling it. I had to go back to the boat. So he said are you sure, and relax and I couldn't. I was terrified! Then he called the Tender over and dropped out of sight. Now I was alone in the water, and the man in the Tender said, "now take off your weight belt, remove your vest, etc" and I'm like, AAAAAAAAAAAHHH!!! I'm alone in the water fool! Pull me in! But had to be brave and just hurry up already. I got my weight belt off and my vest and then finally I was safe in the boat. We drove back to the sailboat and as we did I saw all four of the others surface. We went back and it turned out the Tender dropped us off in the wrong place and they weren't supposed to be so far out and Teri said they dropped to 60 feet under the water and still no bottom in sight. I was kind of glad I didn't have to drop that far. But by the time we got over to them, I was feeling totally calm and I still regret that I didn't just ask for a second chance at that point.

Anyway, so here I am, in the Tender, with no hat, and I have gotten water all over my sunblock and we drove around for about 45 minutes. (On the upside, I did get to drive the boat.) But, you guessed it, SUNBURN. All over my face, ears, neck. Eyelids puffy, lips swollen, etc. Which pretty much ruined my chances of any more fun on the boat. I was MIZ! (Miserable, for all of you who haven't met Charli Taylor.)
And so, I didn't snorkel the GBF, didn't dive the GBF either. BUT, I did go on a dive, I did drop out of a dinghy into shark-infested waters, and so I consider it a success.

In another post I will describe the unsanitary conditions of the Spank Me, but I'll leave that for now. 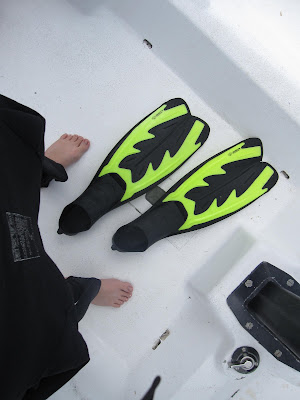 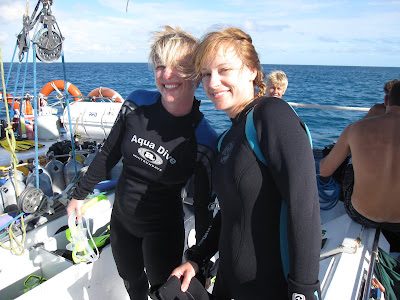 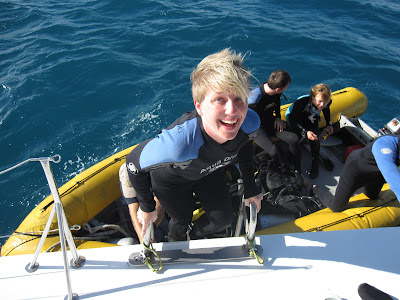 This is proof that I can't travel anywhere without something very embarrassing happening to my face: 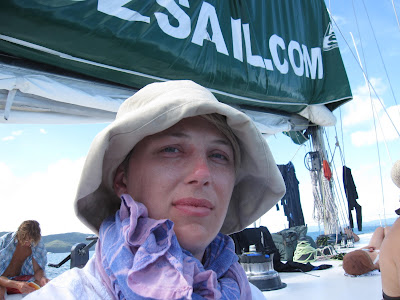 Sunset, from the sailboat: 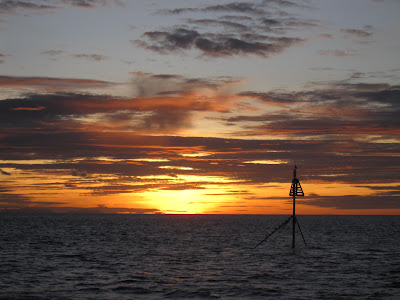 Posted by A Lady Reveals Nothing at 2:58 AM

You gatta hahden up, mate!

I think your face looks adorable. Bee stung lips are all the rage. What an exciting story! For the record, I would have totally freaked out too. Yikes, 60 feet down into the ocean. Makes me want to cry just thinking about it. When we lived in Australia my dad went scuba diving once and they lost a guy.
They eventually found him, but it was almost dark and very scary. He brought home a lobster that night.

I am trying to understand why you are using the abbrev GBF and not GBR (the r for reef...what does the F stand for in GBF??)

You did good though...I am proud of you!

I always forget to say who the post was from above...it was k8!