The Spank Me Cook 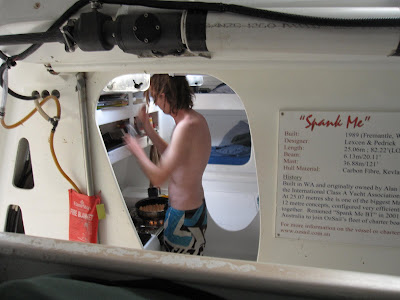 This was our cook on the Spank Me.  He did a great job, truly.  And a NICE guy.  Seriously.  In fact, we met him in the dive shop the day before.  He was applying for the job, and they hired him the next morning at 9am.  I just wanted to illustrate, or I guess show you his butt crack: 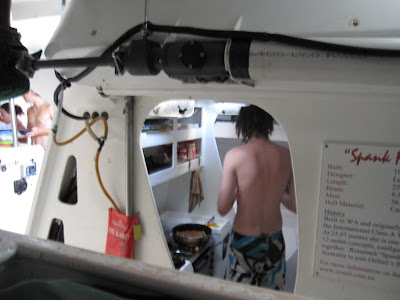 Which we were subjected to for four straight days.  On top of his head sit 37 red dreadlocks, four of which liked best to sit square on his forehead, no match for the hand sweeping them back once every 30 seconds.  On top of his bottom, the same board shorts.  For four days.  Never a shirt, never a different pair of shorts.

One night, Teri went down to her bunk and noticed a gassy smell.  This wasn't unusual, but it was stronger than normal.  So she mentioned it to the 23-year-old skipper.  He mentioned it to the cook, and that was about it.  We went to bed.  That night, the poop smell was particulaly strong coming out of the toilets, and so I didn't notice any accelerated "natural gas" smell.  At about 6:30am, when Teri was waking up, she heard the sound of repeated matches being struck, but not ignited, and then the Cook cursing.  She considered getting the heck out of there, but was too sleepy.  Another strike, and then nothing.  Then, BAM!!!

The above picture was taken from my bunk.  So you can see we were sleeping right by the gully.  Gally.  Whatever, the Kitchen on a sailboat.  During the explosion, Cook singed all of his arm hair off, and got burned.  Turns out the gas was leaking all night long (like Teri tried to tell them).

I'm going to count that among my many near-death experiences.
Posted by A Lady Reveals Nothing at 1:36 AM

I clicked on the first picture to get a closer look and by how low his shorts were, and how low the stove is, he could have easily shed some pubes into that sausage. I hope you didn't get one.

You forgot, Sarah, he singed them off.

I seriously don't know if I could have eaten.