Internet Access Spotty, and Armpits Crotty (that means Sweaty, I just made it up)

Labels: Samoa
Guys!  No internet access for 5 days makes me very anxious.  What if somebody dies or something!

So I'll just make a small post.  Have you ever heard of the International Date Line?  I guess I had, but didn't realize this simple fact:  In Samoa, it's like 3pm, right?  In New Zealand, it's also 3pm, but it's TOMORROW!  And they are only separated by a 5 hour flight.

So, when we left Samoa at 7am, we arrived at 7pm the NEXT DAY.  We lost a whole day in transit.  Plus we had to stop in Tonga, a small island, and New Zealand and had some major layovers.

SO, right now I'm in Sydney.  I have some more to say about Samoa though.  This heat is extremely hard for me, I think I'm a Minnesota Flower.  ha!

In September, Samoa switched sides of the road.  They used to be on the right hand side, just like us in the US, but then they switched to the left.  The reason I think is because cars are cheaper and easier to come by if their steering wheel is on the right side of the car.  Well, imagine how hard it would be for a whole country to one day just switch sides of the road.  The government was just going to put up a few signs.  The people protested, and so the government actually did a pretty good job marking the road with arrows and even for pedestrians wrote LOOK RIGHT with an arrow on the cross walks.  Because, if you're crossing the road you can be killed if you use your habits and look the wrong way first. 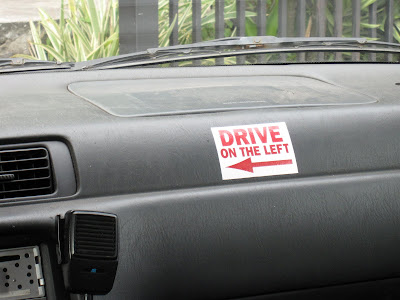 This sign in a taxi made me laugh, but I thought it's probably pretty helpful.  We met a lot of people who admitted they hadn't driven since the change.
Posted by A Lady Reveals Nothing at 11:08 PM