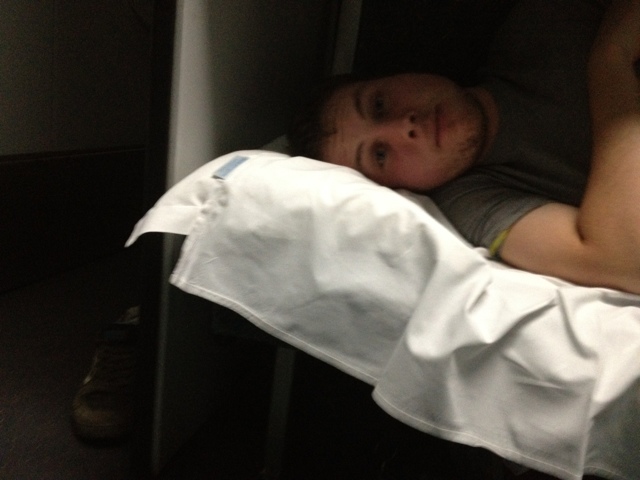 This is a picture of Ross and a very stinky shoe. It's on the train that we took late night from Krakow to Bratislava. We took off from the train station about 10pm. The sleeper car was tiny, and there were two rows of triple bunks. When we arrived only the top bunks were taken. Ours were the bottom bunks. There was no luggage storage underneath, so Ross hefted my 18kg suitcase above his head and stored it in a luggage rack up by the ceiling. I silently hoped it would not fly off in the middle of the night onto the head of the girl in the top bunk.

We weren't sure when the train would arrive to Bratislava because the tickets didn't really say, so we were kind of nervous to just go to sleep without setting an alarm. The people in the top bunks told us not to worry because the train guys would wake us up.

Then the people in the middle bunks came on the train and just stood outside our car for a while and talked. The guy of the couple took off his shoes out there and his feet were so stinky that the smell came all the way into our sleeper car and stunk it up for the rest. of. the. entire. ride. We had already established that the window didn't open, and the A/C seemed to be inoperable, so it was just as horrific as you can imagine. The smell literally never went away. I even sprayed some of my perfume on my upper lip but it didn't work for too long. Still stunk when we got up in the morning. No joke.

I don't sleep well when I know I have to get up really early for an important reason, so I woke up a million times during the night. The train stopped at a ton of stations and sat at them for 15-20 minutes sometimes. That made me feel better because I knew that when we got to Bratislava it would be a bigger city and most likely we'd stop there for a long time. I ended up waking up at 3 and staying awake. The train didn't arrive to our destination until 6:30. At one point when I was nervous about our stop I got up to use the bathroom, and stayed in the hallway breathing the fresh air for about 15 minutes. What I'm getting at is that we stopped a million times for a long time at each stop. So when the man did wake us up at 6:15 to tell us that our stop was in 15 minutes I didn't panic, but leisurely woke up and gathered my stuff. I didn't wake up the girl on the top bunk until we were fully stopped because I didn't want Ross to hit her in the head with the suitcase. It was kind of stuck and the two of them took about a minute to get it down. Then Ross tied his shoe, we checked under the beds and set out to get off the train. I was getting into the stairs area about ready to get off, and the train started moving.

I looked at the man who woke us up and I was so confused. He looked at me and said "STOP" while pushing a red button. I was so tired I thought he was trying to stop the train. But it didn't stop and I was still really confused. We were only stopped in Bratislava for three minutes! And it left without letting us off! Finally the door closed and the man left and came back (I seriously thought he was going to stop the train, ha!) and said "next stop one hour!"

Ross and I looked at each other like WHAT JUST HAPPENED?

Now after an hour the man woke us up again but this time yelled and hooted and yelled at us some more to get off the train. Where was this enthusiasm at the last stop, I irritatedly wondered? I asked, "can we ride all the way to Budapest?"

So he kicked us off. We bought $13 tickets for Budapest, waited three hours and then continued on.

Posted by A Lady Reveals Nothing at 5:25 PM

Your #1 fan said...
"But then you eat a $6 Turkish meal and three beers later you decide it was all for the best?" right?

Trails and tribulations of travel. If stinky feet and a missed stop and a good nights sleep are the worst things that happen, you are doing well. And it makes for a good story....