Labels: Central America, Fun With Language, Kady Stupid
So I am staying in Esteli, Nicaragua for about 6 weeks.  (Pronounced estel-EE).  In order to tell the taxi driver where I live, I have to say "by the El Gallo mas Gallo", which is a store that sells mattresses and washing machines.  Naturally.  (You maybe have thought it sells chicken, like I did.  But you, like me, would be INCORRECT.)  Anyway, El Gallo mas Gallo means: "The rooster, more rooster."

Or, "The Roosterin'est Rooster."  Naturally. 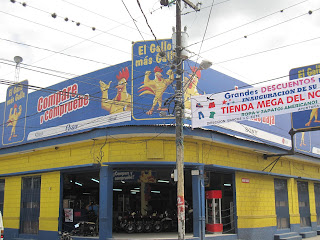 If you're wondering if I'm safe and stuff...yes.  Kind of.  I'm living with 5 other girls.  There was a break-in, but it was months ago when everybody was away for the weekend.  Poverty here dictates that there is going to be theft, but fortunately it's rarely rarely violent theft.  Mostly people break in when they know the house is empty.  The landlord here installed an alarm system after the break-in, and so now it's a little safer.  On our street there is supposedly a gang of young kids who hang out and sometimes rob people, so I avoid going that way and I don't carry a lot of cash.  For the most part, people are extremely friendly and helpful (and patient with my terrible grasp of their Spanish language.)  Of course I've only been here three full days.  More to follow on that.

Tomorrow I'm very excited to start my first Spanish tutor lesson.  He's coming at 3:00.  I'm glad too because I went into a store the other day, and the worker was eating lunch.  He stopped eating and put his plate aside to help me.  Since I was only browsing I wanted to tell him to just go ahead and eat, no problem.  All I could think of to say was, "comenzo comida"  which actually means "I begin food."
I need HELP!
Posted by A Lady Reveals Nothing at 12:24 AM

The little fat boy you speaking of is Chancho. This is me ha ha! !Chancho!

That's very bold and cocky to advertise like that... I like it. I have socks with red roosters on them...

It makes sense that all your weird comments are posted at 3 in the morning, Cory.

I begin food? If that isn't a 'Me talk pretty one day' moment.