Labels: Central America, recipe
OK take this recipe with a grain of salt (figuratively), because I did it wrong.  Like who makes gallo pinto without even ever having had it before, or seeing what it's supposed to be?  ME, that's who.  Gallo pinto literally translates to "Spotted Rooster".  (remember El Gallo Mas Gallo?)  Really it's just red beans and rice.  Nicaraguans make it and live off it.  For reals.  I have a friend who lived her for a year and that's all she ate.  First, you have to sort your beans, because the bag from the store is likely to have rocks and mud balls and straw in it.  You look for any wrinkled or molded beans and get rid of 'em: 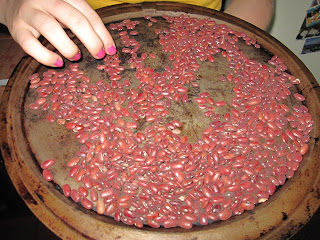 Then you rinse the dirt off them three times and then soak them for 12 hours.  Here you can use tap water because you're going to boil the crap out of the beans anyways tomorrow.  Here's the beans soaking: 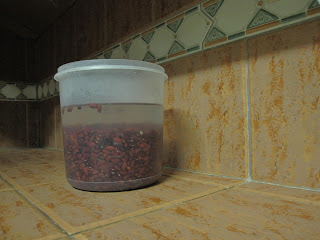 Then you boil the beans for FOUR HOURS.  No joke.  Boil them for four hours, stirring occasionally.  Add an onion and a bunch of garlic for flavor.  YUM. 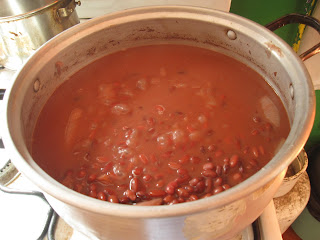 Then start new onion and garlic for a saute, because after you boil the beans for FOUR HOURS, you still need to fry them in a pan.  Fry up the beans for a while and reduce the liquid out of it.  I also added Gallo Pinto flavoring which you may not be able to find, and this whole recipe will be moot.  I'm sure the seasoning is like salt, cilantro and onion.*  (The chopped cilantro in the photo is for the rice.) 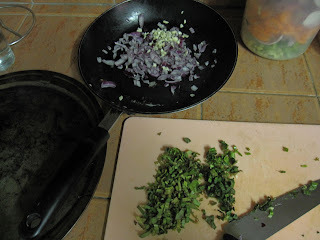 Now, don't do what I did, which is add the beans to fluffy Minnesota style rice (with chopped cilantro added once fluffy).  This is the wrong way to do it.  I was warned, but couldn't listen because I chose the wonky fry pan to do the beans and couldn't add the rice to the beans but whatever.  If you do what I did, you will have a delicious meal, but you won't have gallo pinto. 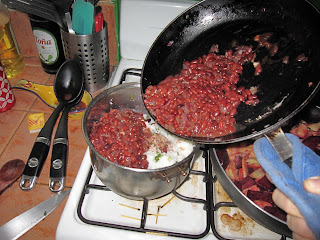 Here you have the finished product.  FANTASTIC.  The other stuff is a veggie fry that I did that is super yum, and it's just like chopped up potato, beets, (start the potatoes and beets first to saute) then as they soften, add carrot, celery, shredded ginger, garlic, and onion.  Add salt and done.

I put radish in but I don't recommend it for next time. 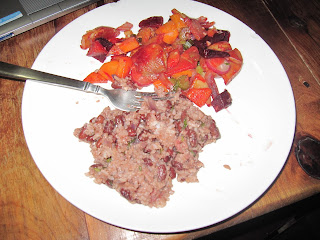 Tomorrow I'm going to make it again, but the real way and I'll letcha know how it turns out.  It's with rice that you FRY, not Minnesota fluff.  It's kind of hilarious that I sort of made it like a Minnesota hot dish.

Gallo Pinto, one of my favorite dishes ever. So simple, but SO good!

The hungry man has said...