Labels: embarrassed, Kady Stupid, Minneapolis
Today I drove from Minneapolis to Hutchinson.  I am going to spend a couple days with my sister and also drop off my car with my auntie, who will be driving it for the next 8 months.  So, technically the drive today was my last time driving my car until like next June.  So I'm enjoying the drive...and at a red light I decided to text Summer because she texted me last night at around 1am to tease me that the marathon was yesterday, but she was wrong and I was going to say something hilarious like, "I may not know where my keys are, but I know when the marathon is."  (Yesterday I lost my keys in the grass in the dark and everybody was on hands an knees trying to help me find them.)  I digress.  Anyways.  When I was looking down at my lap, to grab the phone, I noticed out of the corner of my eye that the cars on my left were moving.  So, I had to give up the texting idea, but I also had a bag of candy corn & peanuts in my lap courtesy of Mary Griffin and I was like, "ooh! snack."  Then I grabbed some, and took my foot off the brake.  By the time I looked up, candy corn in mouth and fingers, I was HITTING THE CAR IN FRONT OF ME.  I was like, "no! no! no! no! no! no!" "OH NO!"  Apparently all the people to the left of me had a green arrow and they got to go, but not us yet.
A man got out of the car that I hit, I got out of mine, and he goes, "are you OK?" and I was like, "are YOU OK?" and then he looked at his truck, shrugged and goes, "no damage here" and walked back to his truck.  I was like, "are you sure you don't want to pull over?"  and he said "No.  You're OK?" and I was like, "yah.  Just embarrassed."
I was really really embarrassed.  So I immediately called my sister and yakked with her about it and the most embarrassing part was that I had to follow that guy for the next 50 miles and he most likely saw me talking on the phone but I couldn't help it.  Also I was too embarrassed to pull over and check the damage on my car.  Because he said, "no damage here," I wasn't sure if he meant his car or OUR cars.  For all I knew, my entire front bumper area was crinkled in.  I had to wait until I pulled into Keri's house 45 minutes later and this is what I saw: 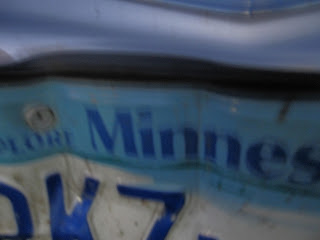 A perfect square punched into my license plate.  From the guy's trailer hitch square.
Posted by A Lady Reveals Nothing at 9:41 PM

Hopefully this doesnt set the tone for your trip. Travel safe - Love you!!!!!!

Oops Anonymous was me - Mary Griffin