Labels: Currently Obsessed With...
My last week in Minnesota, I stayed with an old co-worker.  Old like we used to work together, not old like she's old.  She and I had previously made her daughter a T-Shirt quilt for a graduation present: 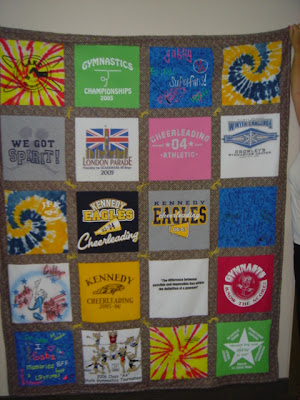 We used some old Cheerleading and Gymnastics T-Shirts.  It was such a hit that Mary wanted to make one for her son who is graduating in May 2011, but I'll be out of the country and so we decided to make the quilt before I left.

Mary bought all the supplies before I arrived and chose the T-Shirts she wanted to use.  You pretty much just need two yards of fabric for the top and three yards of fleece for the back.  (I think.  Mary can correct me in the comments.)

There are 20 T-Shirt squares, so you need at least ten T-Shirts if you use the fronts and backs, or 20 if you're just going to use one graphic from each shirt.  We cut the T-Shirts into 12 1/2" squares and then fashioned them into a nice pattern.  I used 2 1/2" strips between each shirt square, which works out to 2" finished with the seam allowances.  If you really want to know how to make one, like, step-by-step, you can google it.  This isn't a how-to blog.  Jeez.  This is a "I-made-a-quilt-and-want-to-brag-about-it" blog.

Anyways, I'm available for future quilting projects.  You just have to put me up in a guest bedroom, feed me and accept sub-standard work, like Mary. 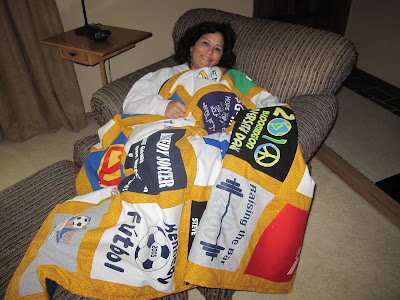 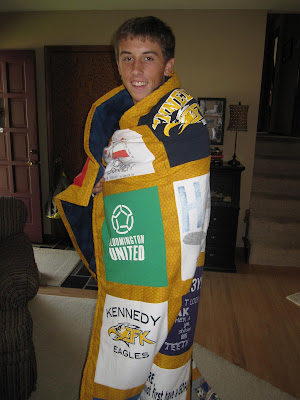 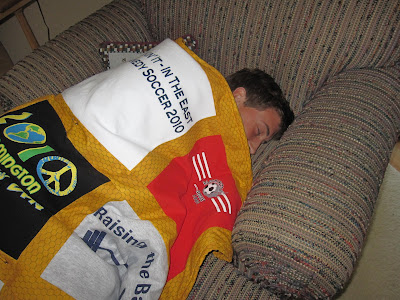 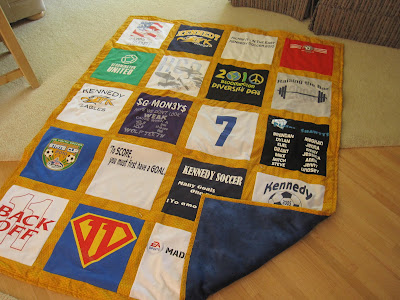 *Grant's quilt*
Posted by A Lady Reveals Nothing at 8:19 PM

I'm working on it. Just keep waiting. And just when you think it's never going to arrive...wait a little bit longer.