Random and amazing facts about my mom and dad

Labels: family, Hal
My mom stole a rosary at Catholic School.  (Or, the nuns found one and asked whose it was, and nobody said it was theirs so my mom said, "it's mine".)  She got caught because she made up an elaborate story to her mom about winning it at school that day.  Her mom mentioned that to the nun and whamo!  Busted.

My mom wore shorts under her school uniform so she could be a tomboy on the playground.

My dad won a twist contest at school when he was 16.

My mom got in trouble in high school one day because the gym door was open and she saw my dad and whistled at him.

My dad leaves voicemail for me like this: "Hal Hexum. International Falls." Then he says the rest of his message. i.e. "I don't understand why people have cell phones and then they don't answer them."

My mom wanted to be a gym teacher.

My dad wanted to be a horse wrangler.

Instead they got married and had a bunch of brats.  They have had a fight just about every single day since October 15, 1966, but also I frequently catch them holding hands and my dad still calls my mom 'Sweetheart'.  Now they are retiring to their cabin and getting horses and a sleigh so they can take a romantic sleigh ride every night.  They are also getting goats and chickens but to me that doesn't seem very romantic.  Anyway, 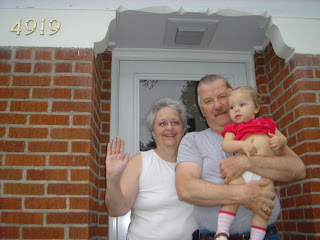 Posted by A Lady Reveals Nothing at 6:00 AM

Congrats Hal and Dianne! <3 <3 Your love is an inspiration to us all. Thanks to your talented daughter, she has helped us 'know' you through her blog. (If it at all bothers you that she writes about you, just reference the 'Anne Wilkes" entry ...thats me!...should make you feel better...eeks!)

Dang it Kady all I did was call and say Happy Anniversary.

I talked to mom today from Nica and forgot to mention it.

Yeah well I forgot it all together.