Labels: elevators, embarrassed, hilarious
This morning, I got in the elevator, and the guy ahead of me said, "What floor?" And so I said, "4". So he punched 4 and 5. So he must have been going to 5.

But I have this thing where I hate the silence in the elevator and so I continued talking. I said, "And 2, and 3." Because it's supposed to be funny, because I noticed that he was on 5. And I always hate it when people punch in 2 or 3 because those people should just walk up the stairs and also because since I'm on 4, I want to be the first stop. So I assumed he would be annoyed that I said 4, and then I wanted to let him know I felt his pain. So then the elevator was slowing down to stop at 4, and so I go, "Have a good daaaaaaaaaaaa-y" (singing opera) and then the elevator took about 10 more seconds to open, and then I said, "I said that too soon!"

I wish I could just ride the elevator in silence like everybody else in the whole world. 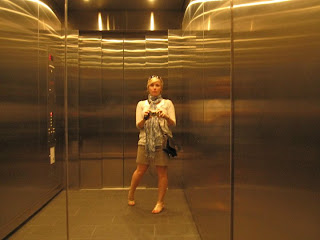 Posted by A Lady Reveals Nothing at 2:58 PM

If you were a normal person who could keep their mouth shut and be disgusted with poop and zits you would not be Kady Hexum.

When you were in first class and waiting for the bathroom, did you also do the "weather girl" in front of the map on the wall?

Kim, that was so funny!!! I forgot about that.

Unfortunately there was no huge map in first class. But I did go up to one of the other passengers and go on and on about Kitt Kittredge in a loud voice.

I can't believe that guy in there didn't crack up laughing. If that happened to me in the elevator I don't think I could keep a straight face.

Maybe he smelled poop and knew it wasn't him.

NO! This is not a poop story!

Does the poop in the first class bathroom even stink? Also if I were named "Kasey" i would shut up because I would know that my poop smells less like a flower and more like the city dump. There is one way to have your waste smell like roses. Eat seeds and a light source and hope for flowering. Scientifically proven. Maybe you should've thrown some poop into that story to spice it up. Wipe that last statement from the record please.

I think you have a fear of being "like everyone else" so your subconscious sabatoges your normal actions so you stand out among the normal people. Although sometimes an attraction may result, more commonly a repulsive reaction will be the dominant response to said actions. Good Luck!!! It may help to hold only the brake at a stopsign. Then apply gas gently. Instead of holding both to the floor and letting of the brake when you see the other light turn go yellow. You will win at the dragstrip with your method. But nobody will compete if you are that good at beating them!

Ah, of Course! I'm a fake blogger. I still think it should be called clogging for a few reasons. 1. You are C.omputer logging. HMMMM. how bout Clogging a little today. 2. Star date, C.aptains log. or Clog and Capin juan luke peekhard used to say. C. is for cookies and cookies are for me!. D. You have the chance to stomp on a response or picture with the power of a wood/metal shoe. Figuratively speaking.

Did he laugh? Or just look like-- Oh please let me out of here safely?