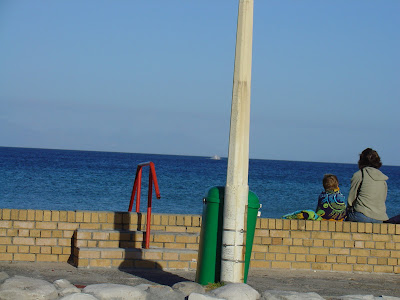 We saw a whale yesterday!!! Or should I say we saw like twenty whales. We were driving along the coast and Mineska suddenly pulled the car across two lanes of traffic and parked the wrong way. She pointed out into the bay and there was an enormous whale just laying there. He would bob his head out of the water, and then his body, and then his flipper and then suddenly he would completely breach out of the water. It was magnificent!
There were some whales that just layed there and some that would breach and breach and breach a million times. I have a photo kind of...my camera wouldn't focus properly. It was so cool. If you look by the pole in the above photo you'll see the splash. I might have gotten a better photo with my non-digital camera.
Posted by A Lady Reveals Nothing at 6:46 AM