Getting home from Kruger 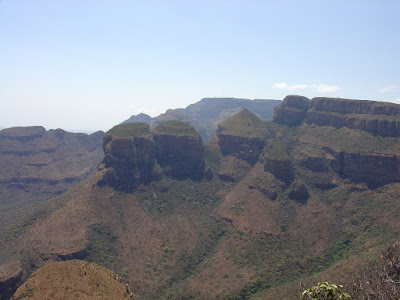 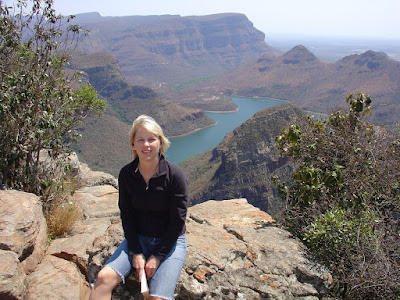 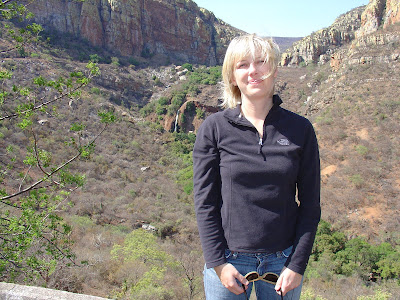 So...after all that hassle of trying to get up to the Kruger National Park I was determined to be comfortable on the way back.

So on the way up the van was set up like this:

As you can see, the best seat in the van belonged to the Second Germany person behind the passenger seat. Still in the action, but tons of leg room. And as you can see, I had the worst seat, positioned over the wheel well and next to elbows lady from Germany.

So on the way home I was really wanting that Germany seat. Bad. So because we got dropped off last at the treehouse, we were first to be picked up. So I sat in my chair and I was so excited. YES! I'm not normally a me-first person, but I knew it wouldn't seem selfish because I'm traveling alone and that was a one-seater. Plus I suffered the whole way there and I would be darned if I was going to suffer the whole way back! Anyway the trailer got hooked up to our van and off we went. Then we picked up the other people. And then I got this pit in my stomach, like, what if somebody asks me to move? What will I say? What if we're not going to be in this van? But we had the trailer, so of course the other people would get in our van right?

They took the trailer off our van and put it on the other one, and we had to move. So I lost my spot. Well maybe I could get a good seat in the new van.

And then, just like I KNEW would happen, I was shuffled into the back seat in the exact same position as last time. Except now it was: 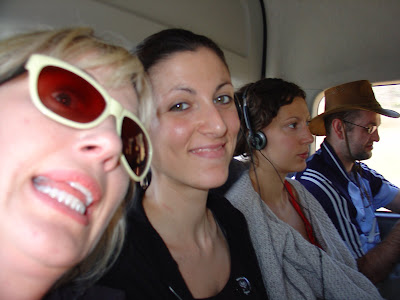 So at least I wasn't with the elbow-y German lady, but it was still so squishy and boy was I MAD. This kind of thing always happens to me.

Luckily the French girls got off about 3 hours later and then I had the seat in the back with just the Irish guy and I read almost my whole book.

And as you can see the drive back was very beautiful in the daylight. We got to get out and stretch a little and look at the Drachensburg Mountains. We also shopped and I bought a wooden thing of three women but it broke on the way home. London bought one and I decided I had to have one too. But I only had 90 rand in my pocket and he paid 150 for his. It was marked for 450 so I thought he did a good job negotiating. London gave me a 200 rand and I offered 120 because mine was smaller than his and she gave it to me for 130. Well then I got back on the van and one of the Spanish ladies said she got hers for 85. I hate the whole negotiating system! And I think I only wanted my thing because the guy from London bought one. I decided I wasn't going to buy anything and then when he bought his I guess I figured I had to have it. So now I have it but it's broken. 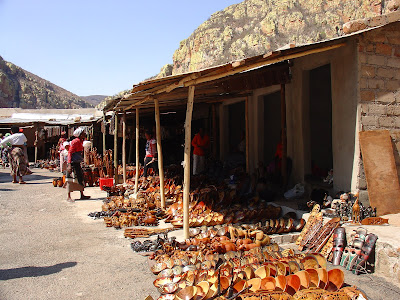 And then the flight back was uneventful and Mineska picked me up and we went to the Schwarztrauber's house and watched music videos and that's when I typed the world's longest blog entry and it got lost.
Posted by A Lady Reveals Nothing at 10:26 PM

What an amazing adventure!!

Besides the Germany-elbowy lady, and the monkeys possibly clawing your eyes out while you sleep. (what I would be afraid of if I was there)

Too bad you lost your good seat, on the way home.

You go Rosa Parks!!! Hold your ground. Don't you move to the back of that bus! (except in your case when you were forced to by circumstances out of your control.

What did the monkey look like? Also Kasey is mad at me for leaving comments on your blog and not leaving any on hers, but you have it where you can be Anonymous or Name/URL and on her's you have to be a google blogger or an open ID. How am I supppose to leave comment? Did all these frenchy and germany women speak english. Maybe that elbowy german lady is complaining to her friends about some blond american woman with a huge backpack hogging up the seat and she kept elbowing the lady but she just didn't get the hint.

When I asked about the monkey I was asking about the one from your earlier post.

Not a babboon, not a black chimpanzee, but like a grey monkey. Sorry I dont have any more info for you. Gibbon maybe?

p.s. your comments give me the LOLs.

Nope, not a gibbon.

The Cory Says, raaaar! I live with a monkey. He almost scratched mine eye out once or twice. I just told him to shoot off to bed without his supper. works everytime. I wish this monkey would climb that "big tree in the sky", as his poop n p in r gettin a noy yin. Is that freddies national park. Any fear of him maybe eating your eyes. I could see that, or after, could not see that. ha. ha.