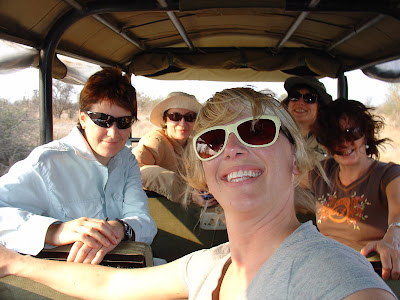 And so we spent the first day of safari driving around looking for the Big 5. In Africa, the Big 5 is a big deal:

There is some debate as to why those five animals are the 'Big 5'. I heard all kinds of theories, but the one that made the most sense to me is that those five are the hardest to hunt. So it's really a hunting term. But on safari, everybody wants to see the Big 5. "Did you see the Big 5?" And you feel cool if you can say yes. So, the first day we saw the Big 5. (Actually I saw the Rhino the night before...and then saw the other four the next day.)

But I probably saw a million elephants. No small feat because there are about 16,000 in Kruger. I also saw tons of giraffes, zebras, wildebeast, kudu, babboon, waterbuck, antelope, vultures, etc.

You're very lucky if you see the leopard. It's pretty elusive and hard to see, but I saw one! If you click on this photo and enlarge it you can kind of see him on the branch. After I took this photo, he stood up, stretched, and walked down the tree. We saw his tail for a while and then he disappeared. Or maybe it was a she. Not sure. 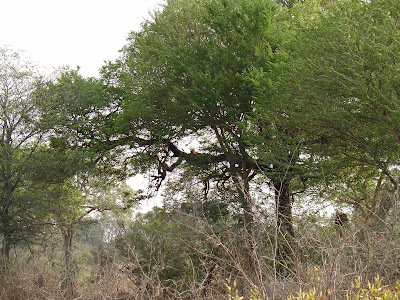 So the people in that top photo were the four ladies from Spain. They are all friends, and they travel together all the time. They have been to China, Argentina, Romania and now Africa together. Isabelle, Carmen, Rosa, and Angeles. Only Carmen spoke in English so I got a chance to practice Spanish. But I couldn't remember ANYTHING. It was so frustrating. I really wish I had kept up with Spanish, because you never know when you're going to need it. (Africa of all places.) But I spent three days with those girls and I really liked them.
Posted by A Lady Reveals Nothing at 5:04 PM

you did not see me, that was a decoy Leopard idiots! I've foiled yet another big five experience. ha ha meow meow meow pur pur purrrrrrrrrrrfect! If you want to see me come back to this tree at 12:12am without you friends for a deeelicious time! pur pur pur purring...

Bring some ketchup please as you americans all taste like cheeseburgers. Bring a spanish friend to season my rice please. pur pur pur purrrrrrrrrrrrrrfect!!!!