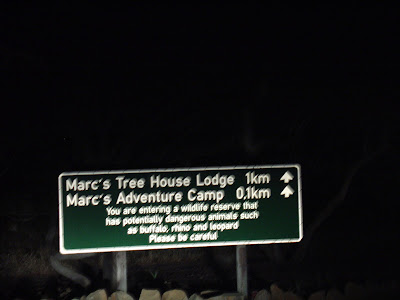 So FINALLY we arrive. To a HUGE gate. And a little man who talks to our bus driver in his language and they shoot the breeze for a while...by this time I am ready to rip his heart from his chest and make him watch it beat until he dies. Slowly the gate opens...I should mention that I haven't eaten all day. When I don't eat, I get really really really crabby. And then the above sign welcomes us. If you can't read it, click on the picture to enlarge it. It says something like be careful there are big animals in this gate that will eat you. I'm like, why is there a gate? To keep the animals IN? SHEESH.

We start off down the 1km long driveway that brings us to the lodge and suddenly, there in the road, are two HUGE rhinocerous. Right in our way. Wanda (the dude driving us who likes song number 6 and song number 8 alot) screams, "Photo! Photo!" Which he did the whole time we were being bored by deer. So, naturally I ignore him and continue to be irritated at the whole situation. Then he's like, "PLEASE! This is BIG 5! Photo! Photo!" So I slowly reached for my camera and then the rhinos were gone. And I didn't even care. Later on I realized what a mistake that was. We did see one more rhino later but it was far far away. These were HUGE right in the way and not 50 feet from the truck. OH WELL.

So then we pulled up to the lodge and I casually mentioned that we JUST saw two rhinos on the path and about 20 people including the two welcomers went running to the trucks and tried to go and find them too. So I realized that I should have been more excited to see the rhinos but whatevs. APATHETIC.

So THEN I get assigned my room. I get lodge number 9. I see that there's beer in a fridge. I bought one, and then another because I figured this would make me feel better. A bunch of people were sitting around a fire and I went down to join them and wait for my dinner. By now it is probably getting close to 9pm. HUNGRY.

Around the fire I met six guys from Ireland, on day 6 of their 1 year trip around the world. I was instantly insanely jealous. Their plan is to spend 2 months in S.A., then fly to East Asia and spend a couple months in Cambodia, Thailand, Vietnam, etc and then spend 5 months in Australia/New Zealand, and then head to the States for a month or two and then go back home to Ireland. I think they were all about 20 or 21 years old. JEALOUS.

Also there were five dudes from Australia, 2 couples from Holland (there separately), 3 from S.A., me, and the four ladies from Spain. The Irish dudes were challenging themselves to ring the HUGE fire twice with beer bottles. They were about half way around when I got there. So I started helping them. We all stayed up and drank until about 2am. Now. During the evening, I found out that my lodge number 9 is the furthest down the trail. It is all by itself, about a 10 minute walk from the fire. And I find out from Garry, the Irishman that they have had lots of "creepy-crawleys" in their room. Each morning, monkeys have broken into their room and even stole their toilet paper. One of the managers warned me about snakes, scorpions, and spiders. So, as the evening wears on, and as I become more and more terrified, I decide on Garry. He's the Irishman that has befriended me, and he seems harmless, and I am getting more and more desperate. I will beg him to stay in my room so that I will not be eaten by a tarantula in the middle of the night. And then they passed around Sambuca. And then Vodka lemonade. And then I was told about the bush babies. They're cute, but they'll steal your stuff and they scratch all night in the thatch of your roof. And then before I knew it, the fire was lined twice with beer bottles. And then I hear about how the monkeys go crazy over anything they think is food, including toothpaste or medicine. Well I have granola bars in my backpack and toothpaste. At this point I am freaking out. But, at 1am I decided it was time to go to bed. And Garry agreed to walk me to my hut. SAFE.

Here it is in the light: 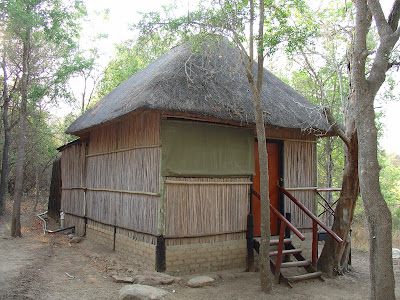 Now, this doesn't look too bad, you might say. But, you need to know that you could see through the walls. So, there were big enough spaces for any kind of animal to get through. Inside there is a bed with mosquito netting (malaria is a slight risk.) On the bed is a huge bug of some sort and Garry moves it outside using some toilet paper. There is a shower and toilet in the bathroom, which has even larger holes to see through and animals to crawl through. Garry checks for snakes and stuff in the shower and there is none. He helps me tuck the mosquito netting around the bed. But, he won't stay in my room. Sorry. So now I'm all alone. But I'm pretty relaxed, what with all the alcohol and so I get in bed, and all my stuff is on the bed in the mosquito netting with me. I convince myself that my mosquito net is bullet proof. But, I am still scared out of my wits. I wanted to show my fear and so I took a photo of myself: 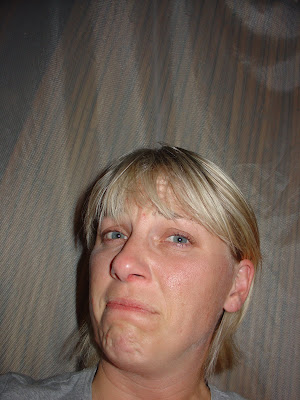 But that doesn't really look scary enough, it basically just looks ugly, and so I used the "Blair Witch Project" setting on my camera to get these: 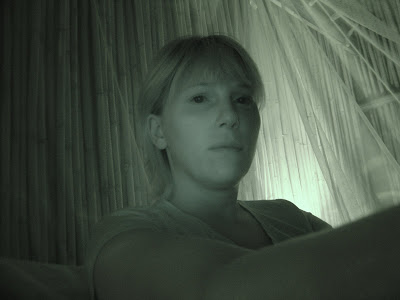 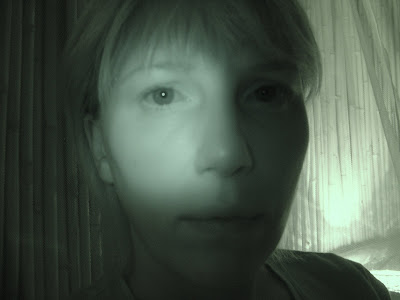 I think that pretty much captures it.

So basically I fell asleep on my back with my arms clutching the blankets on top of me. I woke up the next morning in exactly the same position. And my arms were sore, so I was basically death gripping the blankets all night long.

Now, if I hadn't been so scared, I would have reached my arm out about 6 inches to my backpack, where I have my Xanex and my ear plugs. But I was too scared, and so I suffered.

In the middle of the night I was awakened by a shrieking noise. I found out the next morning that was a jackal. And I also heard a crying noise and that was a hyena. And rustling. Always rustling outside my hut.

I had no clock and no way of telling what time it was and I had to be at breakfast by 7am. So I didn't sleep very well. Also I kept imagining the worst things. I also dreamed that Toby, the guide, was crawling on one of those circular motorcycle things you see at old time circuses and it was all around my room. He would just go "psst. Kady. It's me." as he crawled by and then an animal would follow him. Then I dreamed that three giraffes walked right by me.

So I got up at about 7:30 and headed to breakfast. But first I had to use the bathroom and right outside there was a buck grazing in the grass. I know this because I could see him through the holes in the wall. Hectic!
Posted by A Lady Reveals Nothing at 10:36 AM

In the picture of the treehouse you can't see Gollum because he is wearing the ring, so he is invisable. But he is definately there, you can here him breathing.