Hippos and crocs and babboons and storks

Labels: South Africa
The Kruger was pretty dry while I was there, and hadn't had rain in some time. Here are some Storks and babboons: 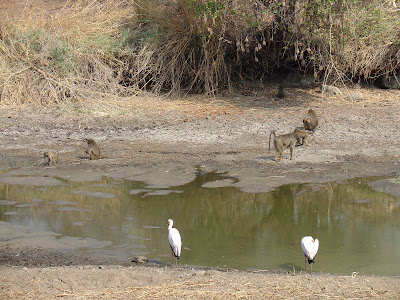 The Swedish lady (Stina) and I were pointing at each other secretly and laughing, like give her the baby, Mr. Stork. Hilarious! Not really. It was hot out.

The lumps in the water here are hippos: 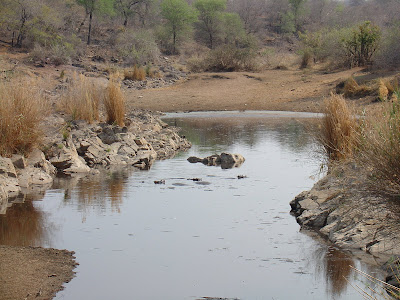 On day two of my safari, since we had already seen the 'big 5', the Spanish ladies and I asked if possibly we could see some other animals. Toby promised us he would show us some Hippos and Crocodiles, which was awesome. I also BEGGED to go to Mozambique. I'm sort of a sucker for stamps in my passport; the more the better. I had to renew mine last year, so I only have a couple stamps. I'm a collector. I don't judge your Precious Moments figurines.
Anyway, it turned out that it would be possible to go to Mozambique, but only if I had more time, because even though we were only 2 kilometers from Mozambique by the way the crow flies, we would have to drive 4 1/2 hours north to get to the nearest entrance point (border crossing).
So, no extra stamps. Though I do consider this a two-country trip, since I set foot in Senegal -- but didn't get a stamp there either :(.

Anyway, so this was all agreed upon (the hippos and crocodiles) the night of our first safari. So the next morning at breakfast I heard one of the guides pull Toby aside and they were chatting for a while and I started to get nervous because there was some discussion (that I was totally evesdropping on) regarding who was going in what truck. It turns out that a group of people from the other camp specifically requested Toby because he was a bird guide. So in one truck, he would have those four plus anybody else who wanted to go with him. Well, we had two girls from France, a Swedish couple, me, and the Spanish ladies. And so it was decided that the new four from the other camp go with Toby and also the two French girls. The Swedish couple and the four Spanish ladies would go with the other guide. Leaving me to decide what to do. I wanted to see Crocs and Hippos, but I also wanted to go with Toby, cuz he's a super-awesome-animal-lover-photographer-guide (and has this blog address haha).

In the end I decided to stay with the Spanish ladies. I didn't really want to spend the day seeking the Big 5 again. So we get in the truck. I was a little put out because the day before there were only 5 of us in the truck and on day two, we had 7. And then the manager of the whole place gets in, putting us at 8. So every seat is full. I remember having that feeling where your whole day will be ruined if all elements of the groupings of people don't fall in your favor. It ended up being just fine of course and it was nice to have the manager of the place along, because he could explain things.

And, I decided against wearing my light pants, deciding instead to wear my new zip off pants that are made of heavy canvas. Plus they are one size too small and so they ride up like nobody's business. Of course, it reached 104 degrees that day. Hot and sweaty and a little crowd-y in the truck.

So day two of the safari was really super awesome. We saw four of the Big 5. Lions, (11 of them! 7 babies and 4 mommas!) elephants, cape buffalo and a rhinocerous. 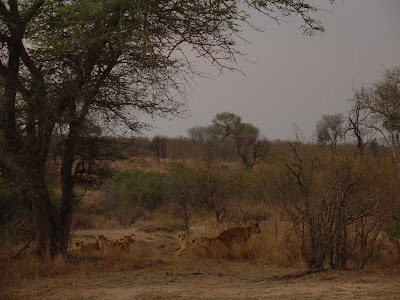 It's hard to see the little babies, but if you click on the photo to enlarge it, you can see them laying in a row. I think one in the front is actually pooping in this photo. How perfect.

After we saw the hippos and babboons and crocodiles, we were driving down the road and pretty soon we saw a hyena. Our guide said that it's really rare to see a hyena in the day time; they normally run around at night yelping and scaring blonde American women in their treehouses. It was lazily walking along, but with a mission. Ahead in the distance we saw vultures circling. We got pretty excited, because usually that means there was a kill and of course the hyena was probably on his way to eat something. We drove along, following the hyena, and pretty soon we stopped. I looked out my side of the truck, and there was another hyena! It came from out of nowhere. And then another and another and another. We stopped on top of a culvert and they were all in there. We saw 9 hyenas! One just looked at me and stared. They are so ugly, by the way. 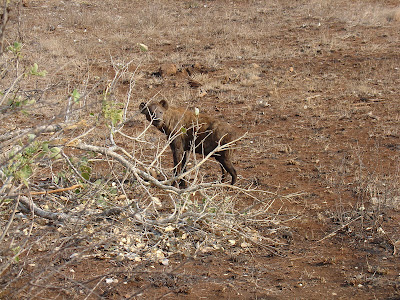 So eventually we figured out what all the fuss was about: 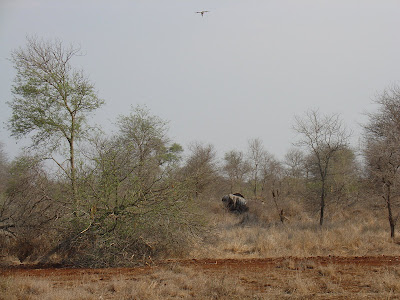 (Sorry - a lot of my photos were taken from far away.)

Then, like as a creme de la creme, we saw a bunch of animals all at the watering hole. My pictures are kind of crap, but there were rhinocerous, cape buffalo, elephant, giraffe, wildebeast and all kinds of deer. The manager guy said there were 9 species at the watering hole. See if you can see some of them in these photos, but you'll have to enlarge them:

Miles, I will give you a dollar (I think I already owe you $6.75) if you can find a rhinocerous. 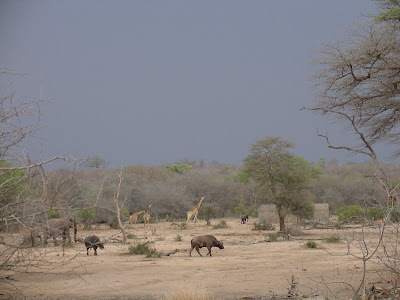 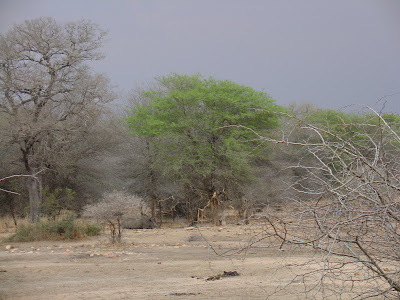 Posted by A Lady Reveals Nothing at 4:41 PM

Wow, you're right, that is just like Sophie's choice. I don't know, I just couldn't do it.
-Ben

Toby and Kady Hexum. hmmmm, has a nice ring to it. Bet he hugs trees and tree houses too. animal hugger! stay away from the sea ray as these are tragedically tragedical and have taken away "Steve Erwin the animal loveable magicallistic creature from down below. He was a Manimal of enormis proportions. Love ya baby BINDY!