I have been back for 16 days. It's time to finally finish the story of my trip to Africa. Besides I'm dying to post important things like singing random tactless songs about babies coming back to grieving mothers.

So on the very last day of my trip I begged Leigh to hang out with me (Leigh is the guy in the photos with a tank top on.) Everybody else was working. Mineska had school and couldn't meet up with us until 12:30. So I rode into Cape Town with Tony. He drives an MG (a tiny little British sports car) and we had to lay my suitcase outside, on top of the window because it didn't fit in the trunk. Plus we put it in his dad's BM trunk because they work together but his dad got confused and took the suitcases out of his trunk.
So Tony brought me to his office at 9, and Leigh wasn't coming until 10, so I walked across the street from his office and had coffee, two eggs and toast for $2.30. Awesome. Then I wrote in my journal for a while. And then I walked to a shop and talked to the crazy owner, who kept talking about the black government and the mistakes they were making regarding being able to sell ivory. If you can picture me tiptoe-ing backwards out of the store with my neck all tightened up like, YIKES, please do so because that's what happened. I thought for sure he was going to make me put on a white cloak.
Then Leigh showed up in his BMW M3. I don't know much about these things, but it's a very nice car and it drives very fast and you can open it just by touching the door handle if the keys are in your pocket. I think it can hover.
Anyway, Leigh gets in the car, and I go to open my door and **CRASH**! I opened the door too hard and smashed it into the abnormally tall curb. Total scratch. Down to the metal. OUCH. I wanted to crawl into a ball and go far far away like Jenny on Forrest Gump. So, I got in the car and couldn't look at Leigh because I wanted to die. Well he was very nice about it and when we got to the aquarium I forced him to look at the scratch and he showed me all the scratches he has put into the car and I felt better but I mean seriously. Kady! Jeez!
So we went to the aquarium at Cape Town and saw all kinds of cool stuff. Like the hermaphrodite eel: (makes it's own offspring, not male or female) 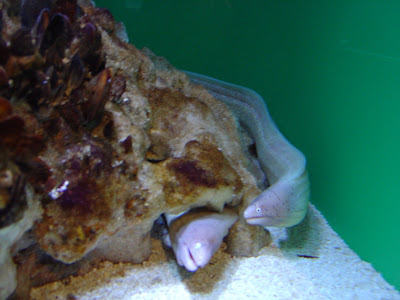 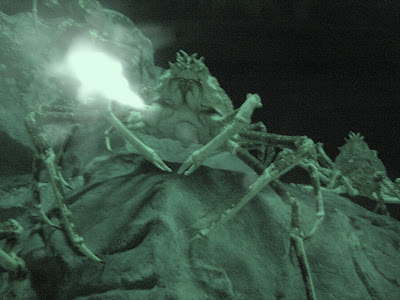 And this ugly thing: 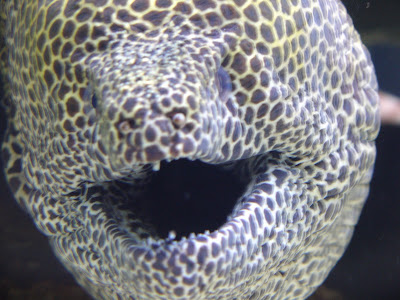 And this cool thing: 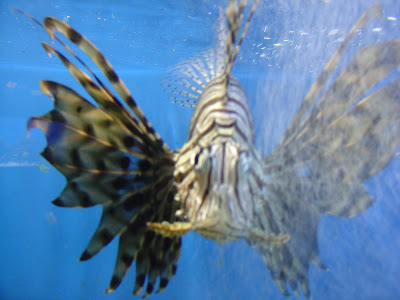 And these pretty things: 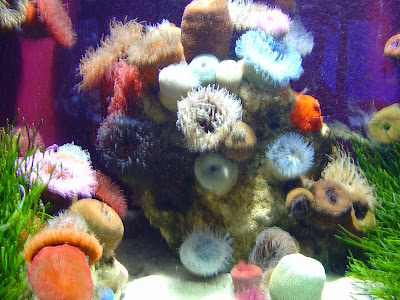 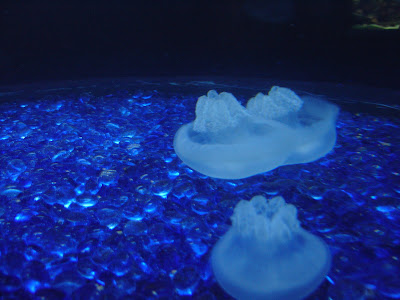 At about 11:30 we got a call from Mineska and met up with her at this fabulous restaurant on the "waterfront" and I had a yummy cosmo and something else I can't remember. And then I went shopping and got myself a really cool leather bag. ummm...then we all said goodbye and Mineska brought me to the airport but on the way we stopped to see Aidan because he had this silly blanket I bought at Green Market Square but he ended up with it that night at Llandudno. He also made me a CD of really great S.African music and other stuff. Thanks Aidan! And then we tearfully said goodbye at the airport. Well not really tearfully. But it was so so so so so so so sad to say goodbye to South Africa and to Mineska.

I knew I would miss their silly accents and their hospitable spirits and their toilets with the "onsie/twosie" flush option.
Posted by A Lady Reveals Nothing at 4:43 PM

You forgot to explain onesie, twosie flush option to us. It doesn't mean what it sounds like it means, does it??

Is foursie an option? Need to know.

Sorry fans. Or, mom and big sister Kim. The Onesie/Twosie flush system is one where there are two buttons on the back of the toilet. A small one for number one (onesie) a big one for number two (twosie).

I've seen it in a few other countries and it's BRAZILLIANT.

Kady, Don't let this story come to an end. I love reading each wonderful little entry every night. I have been enjoying it so much. You'll have to travel somewhere else as culturally interesting soon and keep writing, so I can enjoy these places too. It is like watching National Geographic.